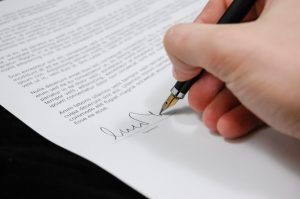 Contracts are usually bilateral in nature, in that the contracting parties bargain for their agreement and come to a meeting of the minds on the terms of their relationship.  To that effect, you cannot be said to be a party to the contract without your assent to the same, which may be via your written signature or implied from your conduct.

This deceptively simple statutory quirk in the law, which effectively replaces common law contract principles of mutual assent, consideration, and privity, should not be overlooked.

If you are contemplating becoming a member of a limited liability company, it would be wise to inquire into the existence of any past operating agreements, documents, or contracts that govern the internal affairs of the company.  It may even be worthwhile to obtain a statement in your buy-sell documents, or membership interest purchase agreement, that no such operating agreement exists, and that you would not have become a member had the existence of a prior document been disclosed to you.

Ultimately, the law is clear that the contractual provisions of operating agreements will apply to you contractually, meaning that by statute it is possible to breach an agreement that you may have never seen, known about, or signed.

Food for thought.  If you’re interested in a more scholarly analysis of the topic, or can’t sleep at night, check out The Ties That Bind: LLC Operating Agreements as Binding Commitments.